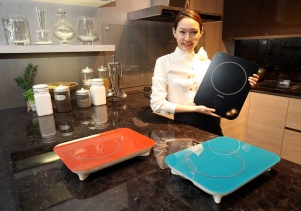 One of the great frustrations to us, is that we haven’t been able to confirm whether Induction hobs will work with a pure sine wave inverter.

Induction hobs are more efficient than hot plates.  In discussion we think this is mainly heat loss downwards on cheaper portable hot plates – it would be interesting to test an induction hob against a really expensive cooker with good thermal insulation below the heating ring (and a good fitting pan).

So much so that there is a movement that is championing induction hobs to make a difference to National energy plans.  Ecuador is an example.  As is apparently Paraguay.  The Paraguay example will be interesting to watch as Ecuador had a high use of LPG and the transition is from LPG to electricity.  In Paraguay, the transition will be a large leap on the energy ladder, from wood to electricity.

Where the grid is stable, and there is enough energy for a government to encourage cooking (remember this puts a big strain on peak load even if everyone is using induction hobs), then induction makes sense.

However, Africa doesn’t have stable reliable grids, doesn’t generally have surplus energy (at peak load), and has large chunks of its population not connected to the grid.  So hence the proposition to use batteries.

BUT can a battery run an induction hob???  I have looked on the web and I cannot find the definitive answer.  If anyone can – please please, put the link in the comments.

I have the kit at home.  You will recall that I bought cooking equipment in 2013 to test the principle.  I cooked consistently at home charging the battery and then cooking in the evening for the family (admittedly one meal a day and with western food – but the principle was there).  I started with lead acid battery and after 12 months that showed signs of deterioration.  I then moved on to Lithium Iron Phosphate.  That has showed no signs of stress after 14 months.

Anyway as part of that I tried an induction hob.  I found that with the cheap 1 kW inverter  it wouldnt fire up.  I read some more and realised it works off a sine wave, so I bought a 1 kW pure sine wave interver.  The induction hob starts for about 3 seconds then the inverter shuts down.  I believe the problem is the peak startup load – inverter is rated 2 kW peak, but still crashes out.  I have been meaning to buy a bigger inverter or a capacitor to mitigate peak load, but other things have been pressing.

However, by this blog, can I ask; does anyone have evidence that induction hobs can run off batteries (with a pure sine wave inverter)?